Showing posts from June, 2019
Show all

I didn't always celebrate Father's Day but now I do 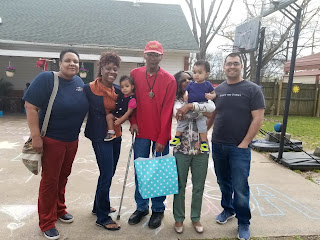 About six months after my parents divorced my father moved out of the state. First he headed to Georgia and than to Arkansas. I didn't see him again until his mother passed away. That was around 1999. Five years with no physical contact. No child support. No alimony for my mom.  It was a strange time for me. I grew as "daddy's little girl," but then the man I called dad was no longer there to support my sister or I. There was a lot I didn't understand about my parents relationship and the varying events that eventually led to the demise of their marriage. I didn't have the full picture and it took a lot of years to get it. At the time it wouldn't have mattered because I had to adjust to my new normal - mom filling the role of mom and dad. It was a difficult transition for everyone. We all resented my father for many years. From high school until my late 30s I didn't celebrate have a reason to celebrate Father's Day. The man I was fond of as a
7 comments
Read more
More posts