Showing posts from November, 2010
Show all

November 12, 2010
Hello all, This weekend my task is to revise my feature length script Finding Patience for the six or seventh time. I'm not quite sure, but every time I revise a script it feels like a never ending process. That's probably because it is in some respects. I will keep this entry fairly short because I need to get cracking on it asap if I'm to finish act two and three of the script and have it emailed to my mentor come hell or high water Sunday night or maybe even early Monday morning. The devil is definitely in the details. Lately, I've been procrastinating.  I know it isn't helpful to my writing process. I use procrastination as a creative crutch, but if I am to be the writer I know I can and need to be I have to break free of it. This blog entry is my kick in the butt to get to work.  It's not easy to go back to a script and analyze what went wrong. It isn't easy to find pick out the exact page where your protagonist lost her way and her story arc hits
1 comment
Read more 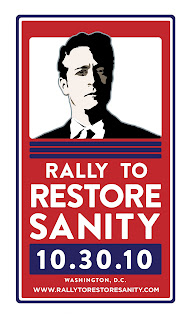 I am proud to say that Karim and I woke up at 4:27 a.m. (we were actually supposed to be up at 3:30 a.m., but I messed up with the alarm), brushed our teeth,  got dressed quickly, and hit the road for Washington D.C to be apart of the Stewart/Colbert Rallies to Restore Sanity/Fear. We made pretty good time and didn't hit traffic until we were in Baltimore, Maryland on route 295 going into to D.C. When were arrived in our nation's capitol, www.clubquarters.com/loc_washingtonDC.aspx we checked into Club Quarters, and then met up with Gorman, a friend of Karim's who also was looking forward to attending the rally. It was a great day for a rally. The tempature was on the warm side for the end of October. When we hit the mall and saw hundreds of people heading toward the front of the mall where the stage was set up, I was taken back. The John Stewart show demo tends to be geared toward males, ages 18 to 35, but what I found at the rally was people of all ages, ethnicities, an
Post a Comment
Read more
More posts