Showing posts from February, 2018
Show all

Each one, teach one: A speed dating exercise in mentorship 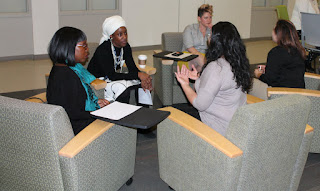 "Each one, teach one." - An African proverb The African proverb above has a strong significance in my life. It's significance is two-fold; historical and practical. According to Wikipedia, the short yet powerful phrase, "originated in the United States during slavery , when Africans were denied education , including learning to read . Many if not most enslaved people were kept in a state of ignorance about anything beyond their immediate circumstances which were under control of owners, the law makers and authorities. When an enslaved person learned or was taught to read, it became his duty to teach someone else, spawning the phrase "Each one teach one." From a practical stand point I've been impacted by those who have embraced this proverb. Since I was a kid, individuals have helped to educate and influence me by putting this proverb into action. At the early age of five I was learning new skills, being encouraged, and mentored to by women l
11 comments
Read more

It’s more than a month, it’s an American legacy

February 01, 2018
“I don't want a Black History Month. Black history is American history.”   ~Morgan Freeman Today we kick off Black History Month. During the month of February our nation acknowledges the contributions by black Americans. While I think it’s important to recognize, as a person of color I have mixed emotions about the value our society gets from this national acknowledgement. The high-level view during the month makes me feel like it’s a PC way our society and culture checks the box for addressing conversations and issues relevant to black Americans.   We pay tribute to a few civil rights icons, their contributions, and remember why their actions are still relevant and matter today. However, it’s just scratching at the service. It doesn’t get to the “pink elephant” in the room, racism, its 400-year plus legacy, or the detrimental effects that still weigh heavy on our public and private institutions and the lives of all Americans. Having difficult conversations to advance
1 comment
Read more
More posts