Showing posts from November, 2009
Show all

In Awe After Or: My Take Away 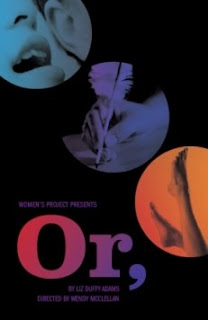 It's been a while since I've posted an entry. Life has been crazy. I've been juggling work, getting married, and moving Karim into my mom's place. I know what you're thinking, still at moms. Yes, in spite of  the claims that the recession is over, I don't buy it. Karim are taking advantage of the opportunity to save, but that's another blog. Lately, I haven't felt the need to blog, not until now. I'm going to do my best to keep this short and to the point (which is sometimes hard for me). Last night, I saw the play Or , produced by Women's Project, written by Liz Duffy Adams and directed by Wendy McClellan. I was really looking forward to the production for two reasons. The first is that I can't even remember the last time I saw a play in the city. Needless to say, I was long over due. The second was that I was supporting women in theater. Back in September, Halima Flynn, a colleague, fellow thespian and theater director told me about a m
1 comment
Read more

November 04, 2009
I can't believe November is here. It all seems to quick for me. I'm not ready to face the fact that there is less then two months to the end of the 2009. Yikes! Every year I tend to get a little frantic as the end of the year approaches. I think it's because I begin to look at the year retrospectively and analyze my progress or lack there of. Even though I'm at a stand still now, the second half of this year has been good to me. I earned my MFA in Professional Writing from Western Connecticut State University, got engaged (By the way, I will be married this Friday, officially off the market), and my short screenplay, After the Headlines, managed to get recognition by the Action on Film ( AOF ) International Film Festival ( www.aoffest.com ) and recently, The Urban Mediamakers Film Festival (www.urbanmediamakers.com ). I'm very proud of the achievements I've listed above, but for the past two months I've been at a standstill with my screenwriting. When I ca
3 comments
Read more
More posts