Showing posts from July, 2010
Show all

And the Winner is....Out of the Box 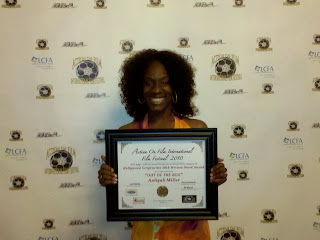 In my last blog entry I said let the fun begin. The fun times at the 2010 Action on Film (AOF) International Film Festival, www.aoffest.com   did unfold and part of me is really sad that the screenings, seminars, and networking is finally coming to an end. I still can't believe that my week here is almost over. Tomorrow night will be final night for the 2010 AOF, time really does fly by when you are having fun. Yesterday evening I had the privilege of attending the 2010 AOF writer's awards dinner. My short script, Out of the box was nominated for 'Best Short' and the 'Hollywood Scriptwriter 2010 Written Word Award,' (and I wasn't aware of the latter). Being nominated for a second year was a great honor in itself. I know a lot of the writers in this fest and the competition is tough. To my surprise I was awarded first runner-up for 'Best Short' and won the 'Hollywood Scriptwriter 2010 Written Word Award.' When my name was announced as ru
6 comments
Read more

July 24, 2010
I have safely arrived in the Pasadena area. My flight arrived late last night around 11:30 p.m. I headed over to Budget to get my car rental and then off to Sierra Madre (a small suburban town outside of Pasadena). I'm actually staying in Sierra Madre, with my friend and fellow screenwriter Pauline Gray. I made all the necessary calls to the hubby and my mom as well as updated my status on Facebook and twitter. I feel well rested and an ready for the day. This morning I power-walked for about 45 minutes while going over my lines for Incantation (my next theatrical project). In about 15 minutes I plan to finally head to Pasadena and register for the 2010 Action on Film Festival. I'm really excited and looking forward to potential networking opportunities. I've already started building relationships with some of the filmmakers in attendance via twitter. I'm really looking forward to being out here for a week. If you read my last blog, you know why. If you haven't
Post a Comment
Read more

I'm just one day away from flying out to Pasadena. The anticipation for this trip has been building for me and I'm ready to get away. I need to. I have a lot on my plate right now. I'm in rehearsals for a production entitled Incantation (I will have a blog about the show when I return), planning a wedding celebration (since I'm already married), and also getting ready for the 2010 Action on Film (AOF) International Festival, http://www.aoffest.com/ . While part of this trip is business, I also see part of this trip as a personal retreat from the world as I know i Preparing for AOF has required a lot of time and I don't have much of it these days. I've had to order two movie-sized posters for the film to display at my screening and relabel post cards to promote the film. I've also been constantly posting on my social networks, handling my traveling accomindations, and a bunch of other little tasks I can't remember at the moment. I'm glad that I was
Post a Comment
Read more

I know my last entry had a tone of frustration. Since then the level of stress I was feeling has subsiding a  bit. I feel better having got some things off my chest. It wasn't just what I wrote, I also received some really encouraging feedback from a fellow screenwriter as well as words of encouragement from others who read this blog. Thank you. I'm please to report, actually I'm more than pleased, I'm completely ecstatic. This morning, I received the earth shattering news (earth shattering for me) that After the Headlines received a nomination from for Best Produced Screenplay at the 2010 Action on Film (AOF) International Film Festival, www.aoffest.com . I was happy when After the Headlines was accepting into the festival but getting nominated really sweetens the deal. I am really looking forward to the trip out to Pasadena in a couple of weeks. Out of the Box , a short screenplay about five women of color living with HIV/AIDS was nominated for 'Best Short&
Post a Comment
Read more

Lately, I've been tired. Too tired to do things I should be doing and when I am working on something, I'm hustling to get it done. I'm in reactive mode instead of proactive mode. It's not a good place to be because, my creative output is low. I really don't like feeling this way, but since I control my destiny, this is my own doing, I'm not sure how I got so off track. When I talk to folks, people are asking how I'm coming along with the wedding. I smile, and tell them things are moving along and they are. I finally have the invitations mailed out. Getting that task done was like lifting a boulder off of my back. I had my first fitting of my wedding gown, my mom and two of my bridesmaids, Catherine and Matie joined me. It went well. I felt good in my dress. I continue to check off tasks on the to-do list which is great, but the wedding celebration bliss I expected to be feeling isn't here at the moment. It's more like a Wedding Unbliss. I don'
Post a Comment
Read more

Black Obsidian Media Group is Back with ResurGENTs 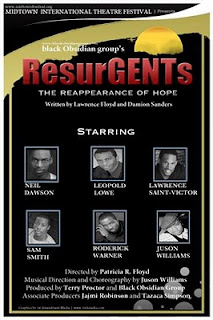 I know I've been a little laggy lately. My apologies, between changes at work and tasks for the wedding I'm spent. I was very happy that I finally had a chance to relax and rejuvenate this holiday weekend. I have to shout out Jackie and Everett for a great weekend in Waltham, Massachusetts. The low-key time with friends is just what I needed although I did manage to squeeze in a little work here and there. I'm glad to be back blogging. I'm long over due. This entry is for my theater lovers, especially those who frequent the Off Off Broadway circuit. This entry is for you. Last year, I blogged about the production of Black Man Rising , the award-winning New York Production took audiences by storm. Winner of four AUDELCO Awards, for "Excellence in Theatre," inclucing Best Director, Patricia R. Floyd, Best Choreography, Juson Williams, Outstanding Ensemble Performance and Dramatic Production of the Year. The production was produced by the Black Obsidian Media
3 comments
Read more
More posts